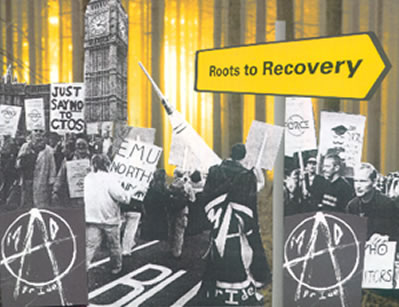 In common with the dialogic, surrationalist, get-up-and-use-me principles of MAD PRIDE, the Mind audience was addressed from three contrasting viewpoints, the speakers united only in their loathing of New Labour's Mental Health Act - and in their conviction that honesty, impolitesse, conviviality, silliness, great music and the trashing of professional jargon are the way forward for Mental Health users.

JASON PEGLER read sections from his book A Can of Madness (Brentwood: www.chipmunkapublishing.com, 2002), and explained his project: a series of books in which people relate their experiences of mental illness without censorship, starting with Dolly Sen's The World is Full of Laughter (Brentwood: www.chipmunkapublishing.com, 2002), launched in a Vauxhall pub on 19 October. He also amused delegates with his chipmunk glove-puppet, which was found in a charity shop when Jason was depressed and which encouraged him to take on the system.

ROB DELLAR talked about the history of Mad Pride in Hackney, and how everyone had cracked up again after the stress of the Clissold Park two-stage all-dayer in July 2000. He also read sections from the collectively-written novel Seaton Point (London: Spare Change Books, 1998) which centres on vampires, gratuitous shagging and bricklayer alchemy - doing for Tennents Super ("self-medication") what Trainspotting did for heroin.

[OTL stands up and walks among the audience, spitting out two "poems" from BENISON FENCE-OFF (Cambridge: Barque, 1999) with Sean Bonney-style vehemence ...]

Chuck loose, the spavin king primed
By textbook itch; he wants an essence
Of bacon flavour freed from earthly lard.
The fidget minuscule is cantilevered to the
Arch procession of greats. Where we site the pivot
Depends upon the piles of multi-subject fact,
Layers of experience intuited by throatsong shams
And voluntaries steeped in cliff. Scrammer days.

Do be forbidden in the closed rank, the shamed
Ankle tensile in the coffle offer. It's 11.00am,
And ham rolls are fresh buttered in the delicatessen.
Odour of new plastic, harbinger of money.
Your docked license shows knowledge of multivalent
Conductors, the home logic of the lame & tearful.
This wince is really too much, a cranium hoist
Carving numerous slogans in the unpacked ice.

[tumultous applause, hats in air, "for he's a jolly good loonie" etc ... well, actually a bit of clapping and then the inevitable "Why don't your poems tell us about your experiences?" "Why are your words going over our heads?" ... Out To Lunch exits weeping ...]