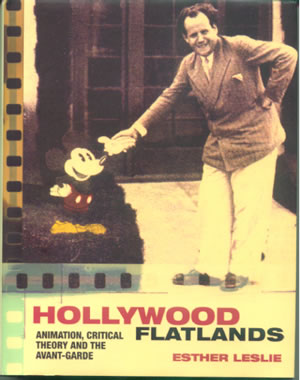 For too long the Left has suffered under the slings and arrows of the postmodernist/philistine assault, meekly accepting the libel that critical avant gardes were forever highbrow, elitist and pompous. Inscribing the fixities of class society on their banner, unable to see past the antinomy of low and high culture, the Popsicle Academy have travestied Benjamin, Adorno and Lukács as continental (mousetrap) replicas of T.S. Eliot and F.R. Leavis. In Hollywood Flatlands, Esther Leslie declines to merely cite the eversame paragraphs of 'The Culture Industry' trotted out by the pomo fuckwits, and instead applies her original research in the Frankfurt archives to explore what Marxists and revolutionaries actually thought about mass-cult phenomena such as Mickey Mouse, Felix the Cat, Betty Boop and Popeye the Sailorman (who appears in the book IN FULL-SPECTRUM COLOUR). Eisenstein's appreciation of Walt Disney as plasmaticist receives full scrutiny (on the cover, Mickey Mouse shakes the great Russian filmmaker's hand). Goethe's colour theory is resurrected to do battle with Isaac Newton's positivism and Technicolor™, Grandville turns your brain into reversicle sandwiches. Kracauer does battle with union scabs and cartoon physics. Nazi Leni finds a real friend in Uncle Walt and his seven dwarfs in Hollywood. In short, Marxist analysis is rescued from logico-structuralist sterility, and understood instead via romantic concepts of immanent, self-motivating, dynamic form - as exemplified by Gerald McBoingboing and Mister Magoo. The Esemplasm has just protuberated a brand new tentacle ...
Out To Lunch, Somers Town, 23-iv-2002