MAD PRIDE AT THE BULL AND GATE
Down with the Mental Health Bill! 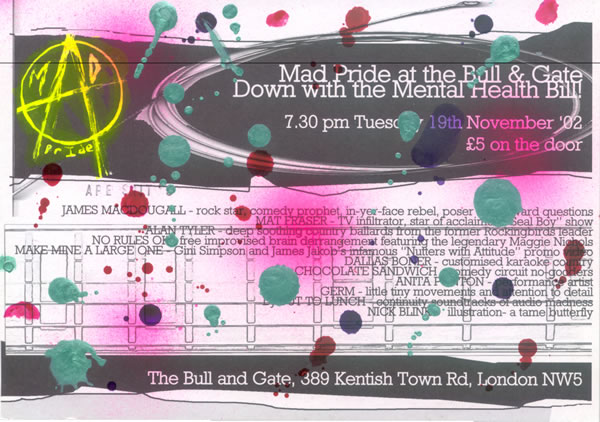 Mad Pride is the first great civil rights movement of the 21st Century. Sick of discrimination, prejudice, media witch-hunts, marginalisation, war games, medication, and generally being treated like shit, mental patients have risen from the psychiatric ghetto to shout "It's Blairite capitalism that brings us down!" and "What's so great about being `normal' anyway?". Mad Pride appreciates the musicians and bands who disdain to lick the arse of a system which shits on them too: benefits have already been played by Alternative TV, Alabama 3, Ceramic Hobs, Gertrude and Hysteria Ward. We've picketed hospitals and parliament and suicide sites and joined mass demonstrations. We've staged a punk rock festival in Clissold Park, issued a cult t-shirt, published a book - Mad Pride: A Celebration of Mad Culture - and released a compilation CD, Nutters With Attitude.

In order to bring attention to the Mental Health Bill from Hell - New Labour's latest attempt to manage UK plc by picking on those at the bottom of the social pile - we staged a protest gig. New Labour's proposed legislation is designed - predictably - to increase the power of the powerful (in the form of the drug manufacturers, aka the pharmaceutical industry) and to cut welfare provision for the powerless. They propose enforced "medication in the community" as the answer to over 6000 Mental Health cases, plus draconian powers to incarcerate sufferers of "personality disorders", even if they are well and have committed no crime. Those who protest are told to shut up: a march against the Bill on Saturday 14 September was "cancelled" by the faint-hearted organisers "in the light of the Soham case" ... five hundred of us marched anyway, and found the public highly receptive to our arguments.

In accord with the idea of MADNESS as ANTI-CAPITALIST protest, we staged outfits who deliver performance REALITY and onstage ACTUALITY rather than biz reputation and commodified boredom (and laptops). First on was DALLAS BONER, a band named after singer Patrick's very first ithyphallic experience, gazing at the televisual image of Victoria Principal during a steamy episode. Singer Lydia joined him to sing duets over a customised mini-disc of modern pip hop, finishing with a cover version of "These Are Not My People" (a Joe South masterpiece, here given a distinctly Swamp Dogg inflection).

Performance artist GERM had promised "small movements and attention to detail", but proved to be the mystery act of the night. Was that man adjusting the lights with a broom our noxiously-named performer or the lighting guy? One day we'll know.

NO RULES OK with singers Maggie Nicols and Francine Luce told us that we could shout what we like, nothing was going to put them off. Nicols was covered in pan lids and frying-pans like an Argentinian protester. Mad witch screams and chants and superlative bebop fast runs (Nicols) and thrilling soul notes (Luce). An aggressive start gave way to communal warmth. As Steve Parry of Chocolate Sandwich said at the bar later, "Mad Pride has somehow bridged the usual distinction between alienated punky aggro and worthy caringness, it's really confusing."

ANITA PONTON spooked us with a creepy whispered soundtrack, hair wig, angsty face, and a 60s get-up in pink.

MAKE MINE A LARGE ONE - the infamous promo video for the Nutters With Attitude CD - was familiar to attenders of the Mind Annual Conference on 14 November, where it had also been shown. Those unfamiliar with the rest of the Ceramic Hobs' oeuvre might like to know that Simon Harris's vocal - a hoo-ha-henry demands his G&T - is a put-on and utterly unlike his usual shouting voice. This is how they do it in Blackpool: watch plastic bobbins perform 69 in glorious detail, also fairy lights and Technicolor carpet samples.

ALAN TYLER soothed us with his deep masculine voice and strong, rugged songs. Yes, you sorry people, you are allowed free form and song structure in the same evening.

Operating from the depths of the unlit floor, CHOCOLATE SANDWICH declared they were the Surreal IRA and going to a blow up a dinghy in Canary Wharf and a balloon in Parliament Square. DOG ABUSE IS IN ME! They also gave out the most scrofulous fanzine - fistfuls of distressed paper in a cardboard file - it has ever been our pleasure to handle on the end of a pair of zirkon-encusted tweezers. ALL HAIL CHOCOLATE SANDWICH!

Although billed as "James MacDougall" because we weren't sure his band APE SHIT could make it, Core Arts and Steve Pulford got their (ape) shit together and so we DID get to hear the best rock band in London since the Pink Fairies. Guitarist Watson excelled as sudden shifts of mood swept through the pulsing four-man unit. When Ape Shit drive a groove down they get SERIOUS. MacDougall's yellow-and-pink Hubba-Bubba bubblegum bag - and the put-on-my-coat-and-leave routine - were simply fantastic: like James Brown, but actually actual! MacDougall is fabulous even (especially) when he's being "obvious". "WE LIKE you, we LIKE you, we really fucking do ..."

To see Jim's poster click here (not for the squeamish)

MAT FRASER was angry, eloquent and very well hung. He showed how well a seal boy can handle the mic (unlike Germ, who dropped it). He drew links between the treatment given the disabled and mental-health sufferers and berated Jimmy Saville and Esther Rantzen and Tony Blair. He was a bit reminiscent of Ted Milton from Blurt: vehemence and fury as balm to the soul. Yeah, Mat, unforgettable!

MC for the night was Rob Dellar

After organising this event we (Rob, Esther, Melanie, Ben, Gini, Patrick) all need to recover. As our contact sheet said: "The organisers of this gig have no monopoly on the slogan 'Mad Pride': we'd like you to form your own Mad Pride groupuscules. The slogan is freely available for anyone seeking to empower mental-health users, stop the Mental Health Act, tear off the straitjacket of capitalist commonsense and smash the law of value". Rob is talking about doing a gig at Chats Palace, Chatsworth Road, Hackney in January 2003. What was interesting at the Bull & Gate was the distinct absence of non-user punters, despite extensive publicity. This was probably a good thing, as the audience was near capacity anyway, but what's the matter? We don't hate "normal people" - we just think normality's not all it's cracked up to be. If you want the best in improv, twisted pop, rock, country and protest hip hop situations... GO MAD!!

As James MacDougall has been writing on pavements all over London:

TOO MANY COWBOYS, NOT ENOUGH INDIANS - GO APE SHIT!