This piece was proposed to Rob Young at The Wire in the aftermath of the Twin Towers suicide attack on 11 September 2001. Unfortunately, it did not fit with other contributions to a special issue (no 213, November 2001): it was too long, and all the rest were on-the-spot responses by local New Yorkers. In the next issue, Young voiced the opinion that the toppling of the Taliban seemed to have created "a happier Afghanistan ... music and song are returning to that devastated land" (Editorial, The Wire, no 214). I concluded that the anti-imperialist thrust of the essay would never find favour, and so published it on militantesthetix. In May 2002, Andy Wilson and Ian Land found it there and offered to issue it in pamphlet form. When the launch of "MUSIC, VIOLENCE, TRUTH" (at the Dolphin pub in Mare Street, Hackney, on Tuesday 25 June) was posted to The Wire discussion board on Yahoo, Young e-mailed me to point out that, far from censoring left viewpoints, he'd made his own anti-Bush remarks in his editorial for January 2002 - an anti-imperialist stand for which he took "a hell of a lot of personal abuse from American readers". It was outrageous to portray Young as hawk and censor simply because he didn't care to print my personal musings on 9/11. I apologise to Rob for misrepresenting him, and hope this makes everything clear.
OTL 25-vi-2002

After the devastation in Manhattan, what can radical music mean? Einstürzende Neubauten - whose name translates, prophetically, Collapsing New Buildings - earned their avantgarde stripes in Britain by applying pneumatic drills to a stress-bearing beam at the Institute of Contemporary Arts. After 11 September, such transgressions surely pale into insignificance. Indeed, any comparison might seem offensive. Musically, telethon America responded to the tragedy by drawing on the sombre substratum of hymn-singing which unites country, soul and reggae. Music designed for church - unmediated, communal, local and introspective - inevitably sounded kitsch delivered by top-selling stars for international broadcast, but in such a context "audio terrorism" does appear distinctly silly. Should the noisy end of the avantgarde shut up, and confess its misdemeanours were all a ruse?

The avantgarde registered its own peculiar response to the disaster. Rushing in where angels fear to tread, Karlheinz Stockhausen voiced what some may have felt, but none dared say. For him, the crashing planes and collapsing towers felt like art: "What happened there is: now you must re-adjust your brain. The greatest work of art imaginable for the whole cosmos. Minds achieving in a single act what we in music can only dream of, people rehearsing like mad for ten years, preparing fanatically for a concert, and then dying. You have people who are that focused on a performance and then 5,000 people who are dispatched to the afterlife, in a single moment. I couldn’t match it. Against that, we - as composers - are nothing." Surely the guy is crazy? In Stockhausen’s defence, he did go on to admit it was a crime, because part of the "audience" were "not consenting". This demur didn’t soften Gyorgy Ligeti’s retort: "Stockhausen should be locked up in a psychiatric hospital".

A comment by one TV reporter - that the image of the planes crashing into the towers "repeated in the memory like a nightmare loop" - was strange. You didn’t need to repeat the images in your head, TV did nothing else for days on end. As usual, the mass media materially create the psychic conditions they moralise. But what should artists do when reality outdoes them? Stay quiet? Admit anti-art destructivism was just a tease? Confess that these tumultous, apocalyptical events we call "radical" were really just conjury with lutes and viols, a luxury product ornamented with frissons of phony danger?

Such evasions smack of the brittle repression of married couples who put away their teenage albums, and call their yen for music a "passing phase". For us, giving up on extreme music can’t be the answer. Quite the opposite: it’s by paying closer attention to the internal structure of radical music - "violence" and all - that its historical and social meaning might be decoded. Stockhausen’s equation of art and terror - "this leap from security, from what’s ordinary, from life" - may be poor consolation for inhabitants of Manhattan who have lost loved ones, or now feel desperately insecure. However, his weird outburst touches on something deep. Why is it that, since the modernist revolts of the early twentieth century, composers and improvisors have continually shouted noise, crisis and violence?

The crucial point is that art is an attempt to tell the truth about the world, the whole world, not simply to provide baubles for those in the comfort-zone of privilege. The economic pressures and national conflicts that create world wars and mass starvation and genocide are still in operation. The operations of global capitalism mean that the inhabitants of Burundi, Beirut, Belfast, Baghdad and Belgrade (I use alliteration to limit the list) have long suffered the terror and chaos which the suicide hijackers brought to Manhattan. Edgard Varèse brought the noise of sirens and bombs into music in the 1920s, a response to the horrors of World War I. His "Hyperprism" anticipated the terror of the Blitz, when civilian populations first became long-distant targets of military hardware. Unlike his "objectivist" follower Xenakis, he bent the shapes he heard into organic ovaloids which speak for the suffering ear. This is why, of all the pre-war orchestral composers, only Varèse has a non-salon, yet humanist ruggedness: a realism that moves the blood and shakes the entrails. Sonically, Varèse can stand comparison to Coltrane and Hendrix, who provided lasting testimonials to a different noise: a struggle against racial oppression in America and genocidal war in Vietnam.

These moments of musical truth weren’t easy to achieve, nor were they facile, attention-seeking stabs at ugliness or excess. According to his wife Naima (talking to C.O. Simpkins, his best biographer), Coltrane studied scales from all over the world, and tried to pack every musical system into his music. If the results sound ugly, that is because you are too wedded to your partial musical identity, to your comfort-blanket of familiar harmony: heavenly universality sounds like hell to closed-in ears. For his part, Hendrix was intensely loyal to classmates who had been drafted to Vietnam. Reaching an anti-US position was painful and slow, yet by "Machine Gun", it happened. His rainbows of audio-feedback revelled in spaces which brought pain to the repressed and rigid: in the ears of GIs, they were incitements to immediate pleasure, to disrespect for authority, and to outright mutiny ("fragging").

Coltrane and Hendrix did not invent this dialectic between musical shock and political liberation. It was the major theme for Beethoven and his followers. Romantic music was a call to revolution that now languishes under the idiot term "classical". The exhilarating allegri of the symphony - the hoofbeats, the jangling bridles, the crack of loading muskets - are not about hunting, as Roger Scruton fondly imagines. They are about bourgeois revolution - "to arms, citizens!" - discovering common aims, seizing the castle keep, liberating the prisoners, letting the in light of reason, sweeping away the cobwebs of feudal reaction. After 1848, when the bourgeois class made its historic pact with state power and landed interests, the excitement turned sour. In march 1871, the French state slaughtered the Communards in thousands, and drove the voice of universal truth and reason underground. In Wagner, massive chromatic transitions invoke myth and fate: surrender to the madness of the stock market as to a natural force. By Mahler, the revolutionary allegri are hollowed-out, febrile, a nostalgic memory.

By rationalising Wagner’s brain-bending chromaticism, Schoenberg and Webern forged a music whose freedom of note combination rejected the respectable, bourgeois world of repression and exchange. Their negation of tonality in Twelve Tone, born through logic, is painful; its parallel in the Blues, itself born through pain, is alluring. These twin attacks on the tempered system stalked each other through the twentieth-century, fighting, aiding and abetting, fusing and swapping places (see Muhal Abrams, Frank Zappa, James Blood Ulmer). The struggle for authentic music resembled political resistance to war and inequality and mass starvation. Its history is likewise fugitive and unofficial: stark glimpses of a different order in a black night of violence and lies. When Mark Sinker [Wire 211] worried that the offensive volume of rock can be employed to confirm conservatism, he needed to pay more attention to its economic base. Noise organised for extraction of surplus value isn’t noise, but silence at high volume: rock as spectacle blocks its liberating essence, its democratic release and insurrectionary energy (hence Punk etc).

However, just because musical truth sounds violent and unacceptable to the status quo, it doesn’t follow that devastation and violence are art. Stockhausen’s enthusiasm for the Trade Center attack could just as well be Marinetti praising war ("the world’s only hygiene"). Stockhausen combines Baader-Meinhof’s elitist idea of spectacular political action with neo-Wagnerian megalomania: he doesn’t realise that art and revolution are not a physical force, a firestorm (despite the images prevalent in free-jazz criticism), but powers mediated via human intellect and will. In other words, the "power" of great music is its truth content, its proposed relation to the totality, not brute force. Music is not real violence, but a discourse of affective states, one that creates opportunities for judgment about feelings. The split between intellect and emotion is transcended, the very terms warped. This can’t be done with a bludgeon (Trotsky’s critique of Narodnik terrorism still stands).

Varèse - and his handful of authentic orchestral inheritors, namely James Dillon, Simon H. Fell, Iancu Dumitrescu and Ana-Maria Avram - make music which short-circuits merely intellectual appreciation (the tight shape of a Haydn Quartet or a pop song), and at moments speaks directly to the body. It maps out the flow of blood, the rustle of nervous synapses, the creak of bone. Yet it doesn’t neglect the intellectual thrill of graphing such biological realities, nor twinges of anxiety and guilt. This emotional science steels the brainpan, giving us the resolve to regard the world in its true colours. The political corollary is not aesthetic awe before the actions of suicidal hijackers, but comprehension. Terrorism is inflicted by the desperadoes of suffering populations. They have no plan beyond revenge on the civil populations of dominant states. Unfortunately, their actions invoke the logic that led to the bombing of retreating Iraqi troops on the road to Basrah, and deaths in tens of thousands.

Violence as conflict between national or religious blocks is a species of psychic repression, akin to conceiving sex in terms of individual gratification, or music in terms of a quantitative measure ("genius", "outreach", "sales"). It obscures the international dynamic of capital and production (mangetouts from Kenya, silicon chips from South Korea, the multi-coloured metropolis), naturalising Anglo wealth and Afghan poverty. By facing the horrors of an unbalanced world, by making us experience its terror and violence and sorrow, radical music offers the satisfaction of truth rather than the blandishments of comfort. It arms the psyche for reality. This will become increasingly necessary as the weaponry and trade-deals sold by the First World to the Third send us their refugees, their anger and their despair. The grief-stricken should be allowed to bury their dead in whatever manner they wish, but sombre hymns and TV-studio candles are not the final word: only a courageous assessment of global realities - musical and political - will allow us to shape a future worth hearing. 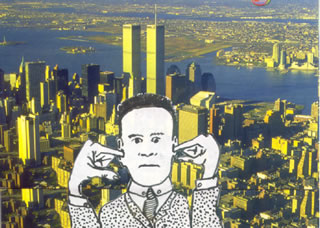 Thanks to Harry Gilonis for the quotes from Julia Spinola's article "Monstrous Art" from Frankfurter Allgemeine Zeitung, 18 September 2001. HG now reports that Stockhausen says he didn't call the attack a "work of art" but a "work of Lucifer" ... truth has obviously become an ongoing process requiring by-the-minute updates ... when are we seizing the TV stations, comrades?